‘17 ringers working as one’: Hard work and practice pay off for bell choir

The echoes and rings of bells filled a basement room and spilled into the hallways of the Walnut Grove Retirement Community on a recent Thursday as the River City Ringers practiced.

A lone spectator peeked in and listened from the doorway. Joyce Miller, a short but energetic woman, led the ringers through Christmas music that they would later play at Omaha’s All Saints Episcopal Church, Presbyterian Church of the Master, the Salvation Army Kroc Center and the Holland Performing Arts Center.

River City Ringers, a nonprofit organization Miller helped form in 1988, is one of the only community handbell choirs in Nebraska, she said. She has led the choir since its beginning. Handbell choirs sponsored by churches, schools and universities are common in Nebraska, Miller said, but not community choirs like hers.

The experienced ringers make it look easy. But the bell choir takes hard work and hours of practice. The switching of bells, the timing, and the tapping of bells with small mallets is all done with one cohesive sound.

The group meets for two to three hours a week and the ringers are responsible for practicing their music at home. Some ringers even show up to practices early to get extra work in with the group and help with their technique. 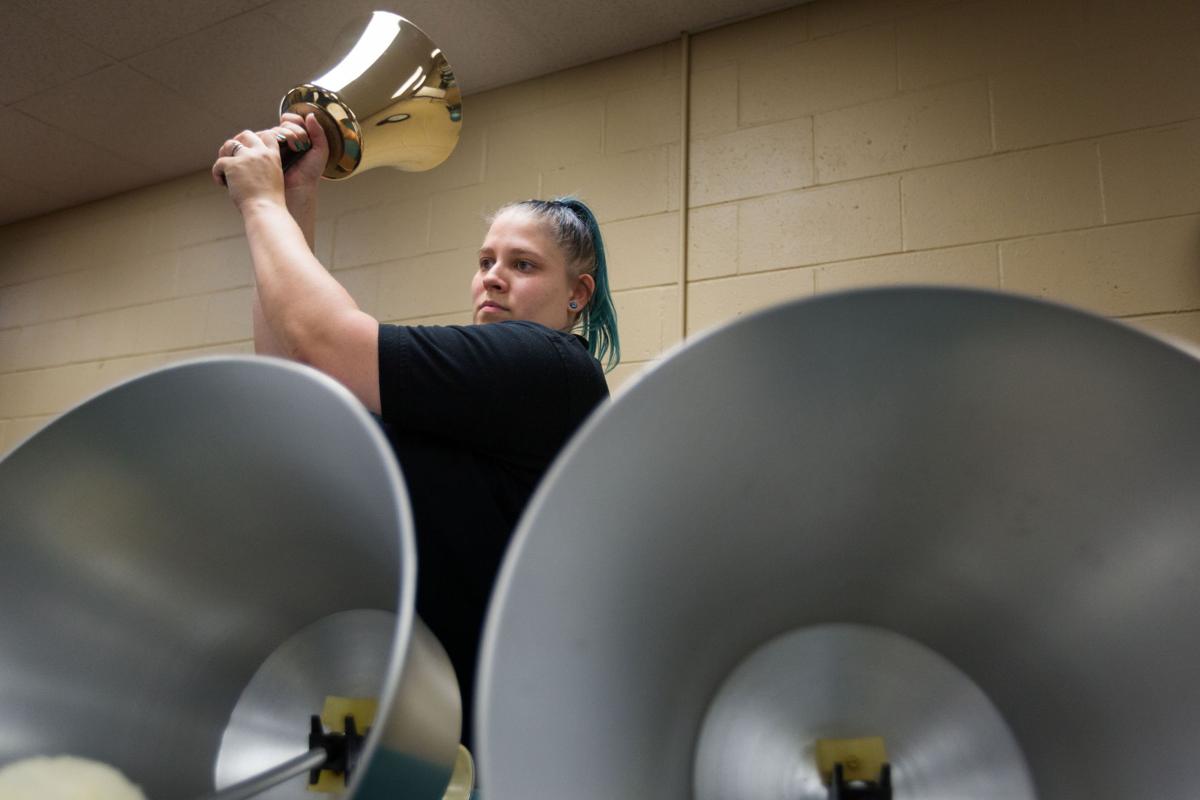 Jordan Wagner of the River City Ringers, rings a bass bell while practicing in the basement of the Walnut Grove Retirement Community. 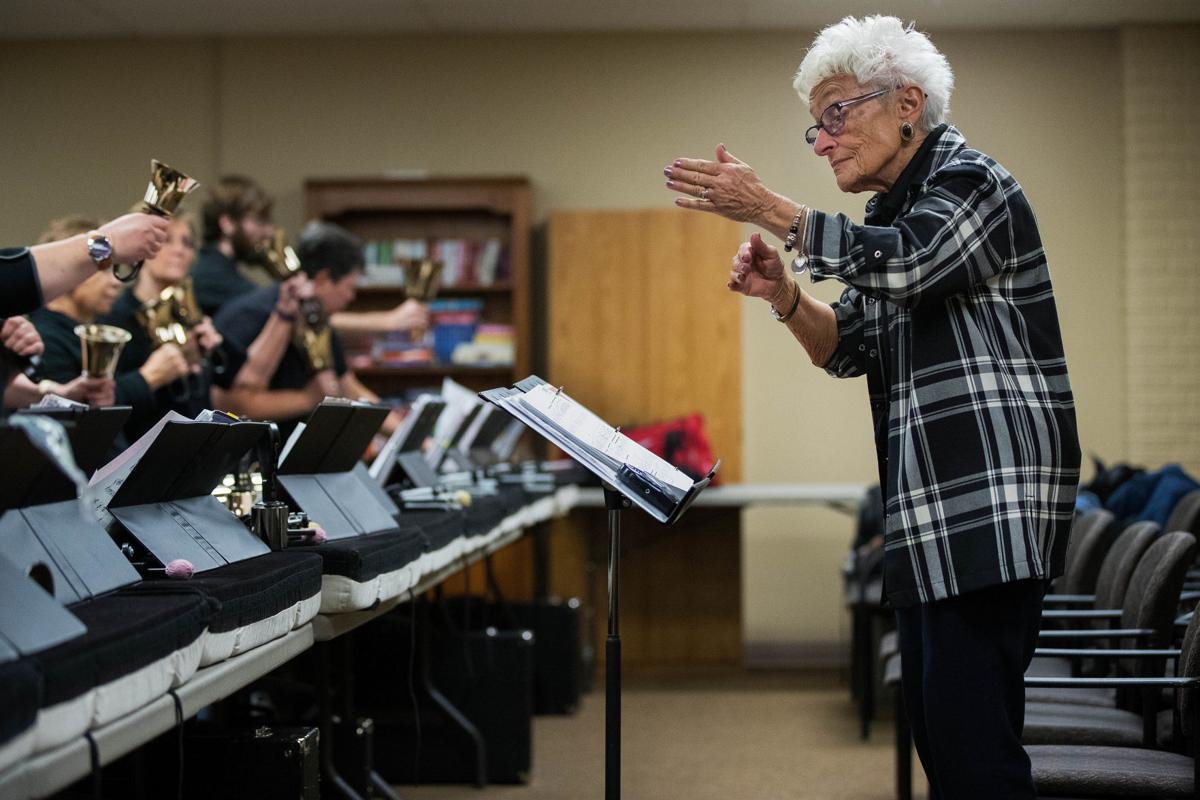 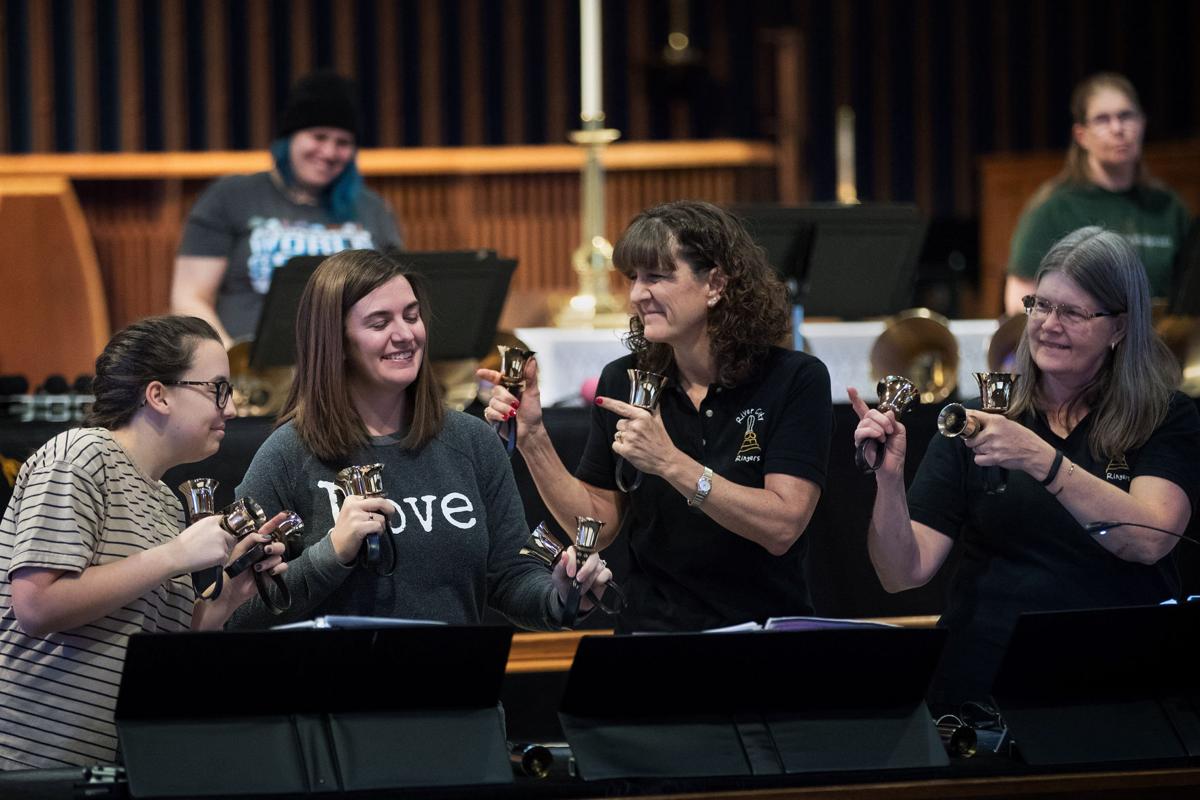 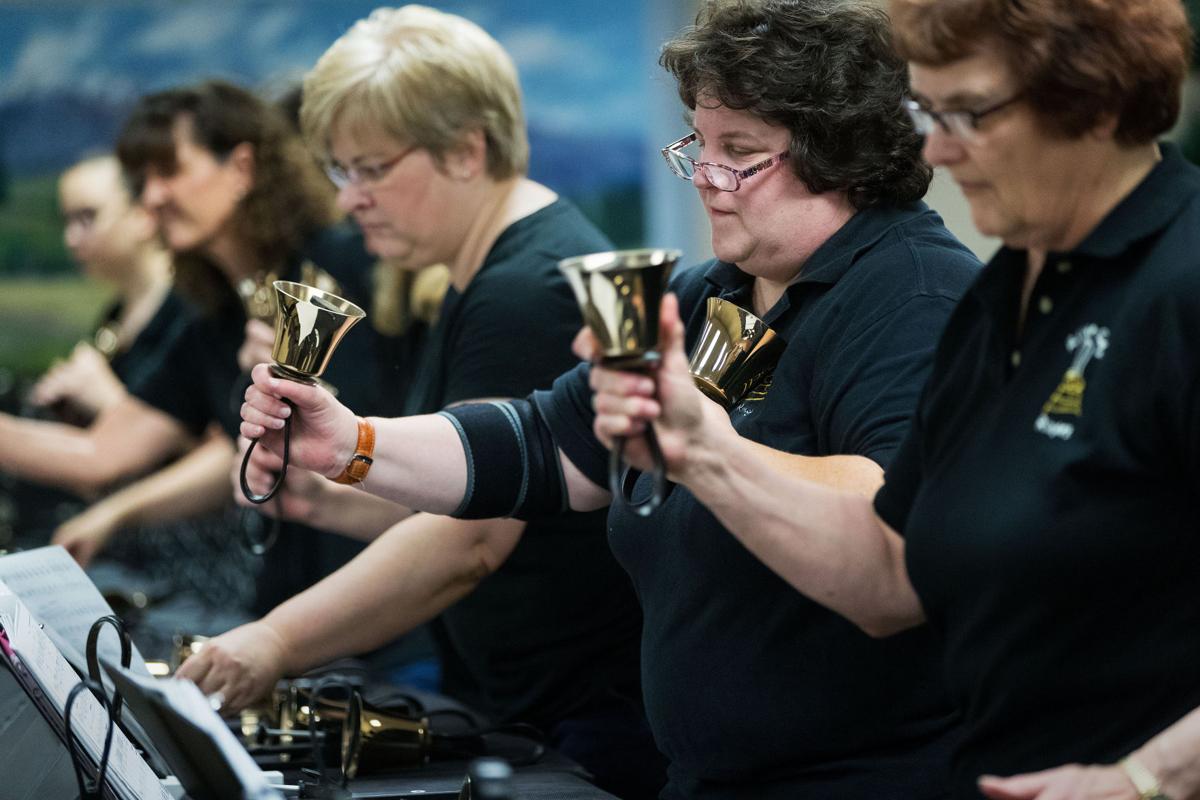 Kristen Oertell, center, practices with the River City Ringers. She said she has been ringing bells for about 35 years. 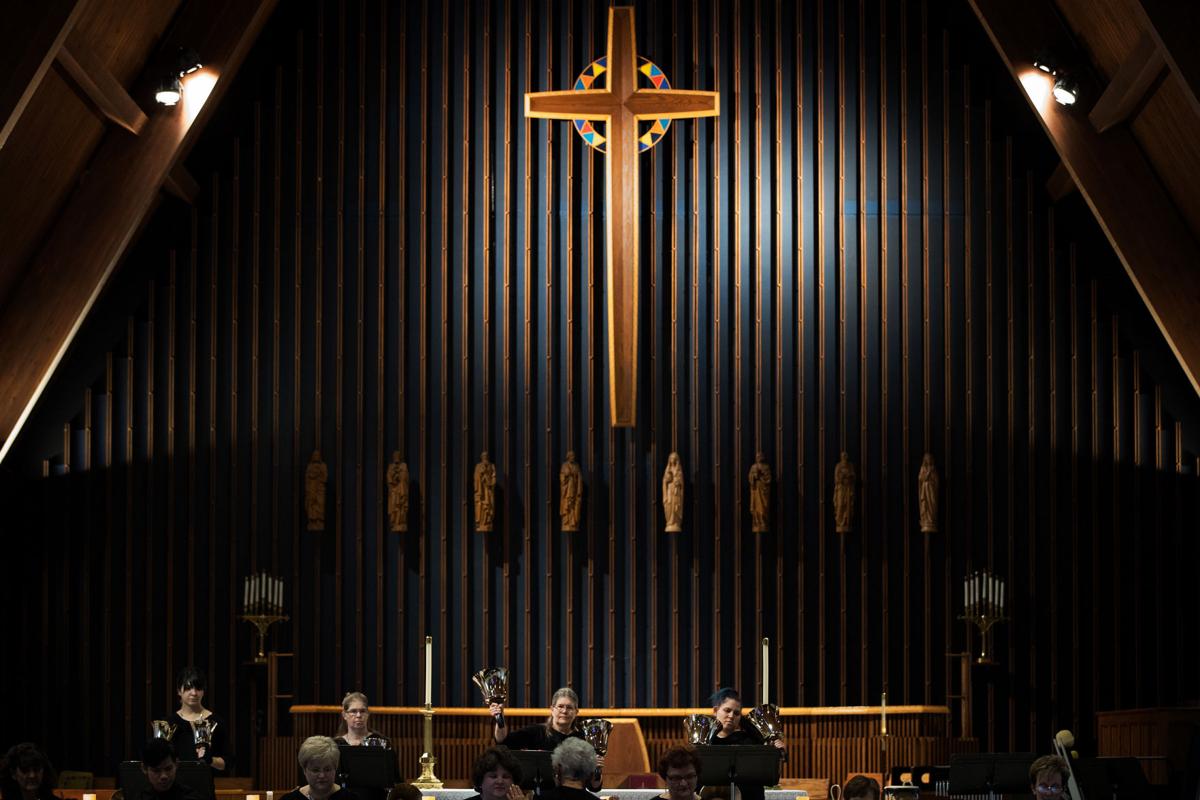 The River City Ringers plays at the All Saints Episcopal Church on Dec. 2. 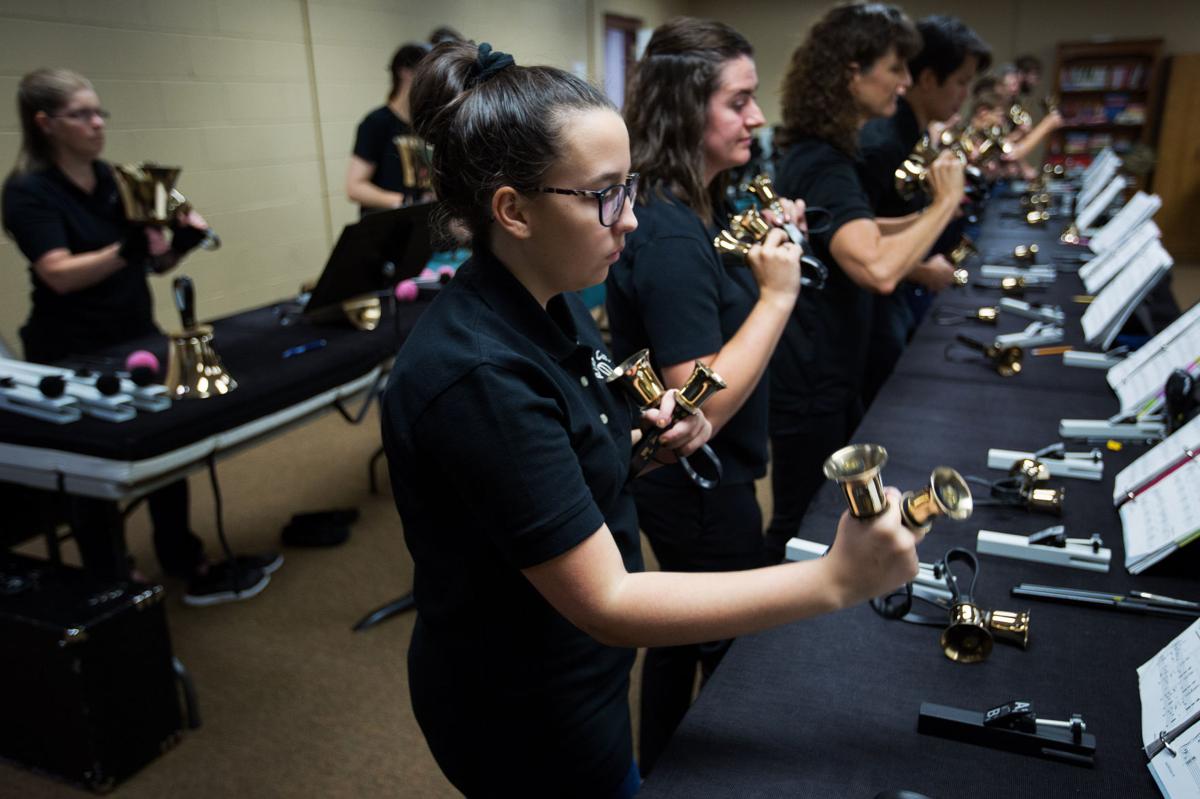 Keith Wess, who has been playing the bells for seven years, described it as a full body experience; hands and arms must be in line, with correct body posture. And each member needs to work together with the rest of the choir.

“For me it’s counting and making sure I’m coming in. … You know, making sure it’s evenly spaced between each person. And I feel like that’s usually a huge issue with bells,” Wess said. “There’s a lot to think about. There’s a huge learning curve.”

For Miller, unity is key.

“You can’t be a bell choir and make music if you don’t understand that it’s not 17 ringers,” she said. “It’s 17 ringers working as one. And that’s very important.”

The bells have even caught the ears of younger ringers such as Maggie Gaughan, a sophomore at Central High School.

“To me the bells are special because nobody really knows about them,” Maggie said. “And so when I tell my friends or my extended family about them and they’re, like, ‘Oh, what are handbells?’ it’s like this magical thing that I get to show them.”

After practicing for weeks, the River City Ringers prepared to perform on a recent Saturday at All Saints Episcopal Church. Ringers became movers as they dragged their musical instruments, tables and stands from vans and cars into the church on Dec. 2. The afternoon sun shone through the stained-glass windows in the back of the church. People filed in and formed a modest, eager crowd.

Katie Quick, who has played handbells for 23 years, knew the hard work would be rewarding, that the music could be powerful. As she performed, she smiled and moved her arms in the rhythmic dance of the handbell players.

“To get your piece down, to get your little piece of music down, to get those hard parts, that’s what I absolutely love,” Quick said. “It’s indescribable. Nervousness. Excitement. To pick out one person and to see their reaction to one piece, it is breathtaking. To be that musician that can move a person with music, there’s not a feeling out there like it.”

Songs like “The Little Drummer Boy,” “Silent Night,” “What Child Is This?” and “Jingle Bell Rock” filled the church’s hallowed interior. The crowd clapped, stood and gave the handbell choir a standing ovation. Miller turned. And with a wide, bright smile, she bowed. The rest of the River City Ringers followed.